Most of the time if they are small pipes, they get fixed and no one knows any different. Other times, if they are bigger pipes, or if they’re on the main road or in a school, then they hit the headlines.

Well, today’s damaged gas pipe is not on the main road; it’s not in a school; no one has been hurt. However, it’s not a small pipe either. In fact, it’s a gas transmission pipeline –  which is as big as it gets—it has the highest pressure of any gas pipeline you can get.

The works were taking place at the $16m Arthur’s Seat chairlift redevelopment. Early this morning an excavator hit and damaged the pipe, causing it to leak.

According to APA Group, the gas network for the area has not been shut off as yet. However, they’ve asked residents in the area to restrict their use of gas for hot water and for heating.

Firefighters from Dromana, Hallam, Peninsula, Red Hill, and Rosebud were all called in, as well as an operational wagon to coordinate the scene.

Police and firefighters door-knocked the area, and a blanket community notice went out to the whole of the Peninsula—taking in Dromana, McCrae, Boneo, Rosebud West, Rye, Blairgowire, Sorrento, and Portsea

The incident that caused the major gas leak

Now, as we are based on the other side of the bay, we don’t get many jobs in Arthur’s Seat area and we only get a few jobs a year on the Mornington Peninsula. The furthest we generally go is Dandenong and Frankston. So I personally don’t know at this stage what happened on this site for this incident to occur.

However, what we do know is that there must have been a catastrophic failure—because of all the utilities that are underground, transmission pipelines are one of the most protected, well marked, and locatable pipelines there are.

What are transmission gas pipelines?

Generally speaking, three lots of gas pipelines are underground. You have the individual services that go from your house meter to the gas main in the street. There are the gas mains, that go up and down most of the streets of Melbourne. And then you have the gas transmission pipelines, that travel from town to town.

APA Group, who looks after the gas transmission lines, does an excellent job when it comes to protecting their underground assets from being damaged by construction works.

Some of the ways they go about this include:

So when you look at what they do compare to the other utility companies with underground assets, you have to admit they really do go above and beyond what is the norm these days from an asset owner.

………which kind of makes it even more frustrating that this pipe got damaged today.

As I mentioned earlier I still don’t know what exactly happened here, so working out what learnings can be made from it is hard to do. But I think I can make some educated assumptions. And also I think for those of you in the construction industry, it’s good to look at another construction crew’s incident and see what went wrong, so you can learn from their mistakes and not make the same ones yourself.

So let’s eliminate the obvious one from the start—the Dial Before You Dig plan. In 2016, there wouldn’t be a person working in the construction industry in Victoria—or, hey, even in Australia—that won’t have heard about Dial Before You Dig. So let’s just assume they went through them.

Now, getting the DBYD plans is one thing but reading them and letting everyone on the job site know what’s listed on them is another thing. I still go on sites today where the office manager has put in a request for DBYD plans and has got them all in his office: he’s told his guys to start digging on-site and they haven’t seen the plans. So the learning here is if you’re the one digging or assisting with the digging at all, make sure you read over the plans and understand them.

Admittedly, you do get a lot of paperwork back from Dial Before You Dig and some people can get a bit lost reading through it all. But on the plans for this job site—especially on the gas plans—it actually states that there is a gas transmission pipeline in the area.

In fact, they go as far to say there are “Critical Gas Assets” in the vicinity. So we know the pipeline that was hit was definitely listed on the DBYD plans.

As these works have been ongoing for some time, we can assume that an inspector would have seen the site and would have confirmed that they had a permit to work in the vicinity of the pipeline.

So what went wrong?

I’m thinking it came down to the permit to work. I reckon someone either did not read it correctly or just chose to take a shortcut and not follow the instructions on it.

Now I should state that, as it’s a major gas pipeline, it is actually covered under the Pipelines Act 2005. To get specific it’s covered by Section 118, Digging near pipelines, and Section 119, Interference with the pipeline.

So, yes, APA may be very strict with what you can and can’t do but they are perfectly entitled to put any rules they want in place in order to protect their pipe from being damaged.

What would we have done?

Well, this could have all still been avoided by simply calling out a Dial Before You Dig certified locator.

Let’s say I was called out to the site. I’d walk over the area of works with the client, to get a good understanding of the works he was doing and where his excavation works were happening—and then I’d look over the Dial Before You Dig plans that we would have requested ourselves for the site and check what was on there.

Within 30 minutes of arriving on-site, I would have seen that there is a gas transmission pipeline in the area of works and would have made sure the client had obtained all the permits required. And if not, then we would have guided him through the process.

I am not alone in this—there are several Dial Before You Dig certified locators in Victoria now, and all of them would have the experience, training, and knowledge to know they should do the same.

For those of you who didn’t see my post last month on how to know which locating company you should choose, then it’s probably a good post to read to give you some insights. And no—it is not an ad for Geelong Cable Locations!

The incident occurred this morning and it wasn’t until 10:30 pm tonight that the pipe actually got fixed. But even then the CFA was still going to monitor the situation until all the gas in the area had dissipated.

So now that it’s all over, I guess that if we have to look at this incident, then we should really look at it from a ‘glass half full point of view.

Yes, it was bad that it was damaged. Yes, it was bad that the Mornington Peninsula had to go on restricted gas use. Yes, this all could have been avoided. But, hey—it could have all been a lot, lot worse. Take a look at this damaged pipe we posted last year, a transmission pipeline that got hit by a bulldozer. We should be thanking our lucky stars that no one got seriously hurt—or worse—on this incident.

Other posts about damaged gas pipes that you may find interesting 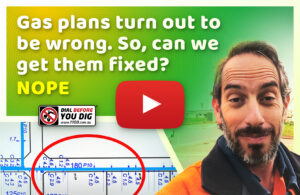 Service locating and hydro excavating at a Melbourne Train Station